The Orthodoxy in every faith has the same problem!

JERUSALEM (AP) — The love life of Prime Minister Benjamin Netanyahu's son is setting off sparks — in Israeli politics. News that 23-year-old Yair Netanyahu is dating a statuesque non-Jewish Norwegian university student was not only a juicy item for the gossip pages. It also unleashed an uproar from religious lawmakers opposed to intermarriage, and prompted debate over the Jewish state's relationship with the outside world.
According to reports in Norwegian media, the Israeli prime minister boasted to his Norwegian counterpart, Erna Solberg, about the relationship during a meeting at the World Economic Forum in Davos last week and informed her that his son recently visited Norway with his girlfriend, Sandra Leikanger. A photo of the smiling young couple appeared in both Israeli and Norwegian newspapers.
On Monday, the leader of the ultra-Orthodox Shas party said he believed the relationship actually caused Netanyahu and his wife great "heartache." Arieh Deri told a local radio station the relationship was no mere personal matter because Netanyahu is a "symbol of the Jewish people."
"I know friends of mine who invest tens of millions and more, hundreds of millions to fight assimilation in the world," Deri told the Kol Barama station. "If God forbid it's true, woe to us."
Other groups called on Netanyahu to put a stop to the relationship. Even the prime minister's brother in law, Hagai Ben-Artzi, took to the airwaves to speak out against it.
"Yair should know that if he does such a thing, if he doesn't break off the relationship, then ... he is spitting on the graves of his grandmother and grandfather who loved him so much and raised him," Ben-Artzi told Kikar Shabbat, an ultra-Orthodox news site.
Ben-Artzi, an outspoken Jewish nationalist who is often critical of the prime minister, said he had not spoken to the family in months. "Maybe they weren't in touch because they were afraid to tell me," he said. Netanyahu's office declined to comment, as did Leikanger.
Israel always had an ultra-Orthodox minority of devout and conservative Jews, who currently account for just under a tenth of the population. Thanks to their political clout, the ultra-Orthodox oversee weddings, divorces and burials — meaning that the younger Netanyahu would not be permitted to marry his girlfriend here — if they one day get serious — unless she converts. Orthodox Jewish Law prohibits intermarriage. In recent years Israel's internal rupture has become even more complex, with religious Jews of various shades, and ultranationalists, increasingly pitted against a secular population that can be extraordinarily progressive on issues like gay rights. The cultural clash has become so extreme — over issues like the religious desire to segregate the sexes on some bus lines or the refusal by the religious to performing compulsory military service — that many Jews joke the internal divisions are more intractable than the troubles with the Palestinians.
Yossi Sarid, a former Israeli education minister and onetime leader of the secular-rights party Meretz, called the younger Netanyahu's love life a "private matter." But he said the uproar among the religious was "nonsense."
"It's not fair. You can't expect fairness from those people," Sarid said. "They don't like non-Jews. They don't like non-Orthodox Jews. They are behaving as fanatics everywhere behave."
Noah Slepkov, an associate fellow at the Jewish People Policy Institute, said the debate reflects changes taking place within Israel.
While intermarriage has long been a "huge deal" in the United States, he said, where roughly half of American Jews marry outside the faith, it has been a nonissue in Israel because Jews and Arabs almost never marry. But that has begun to change, due to an influx of foreign workers and the trend of Israelis studying and working abroad in an age of globalization. "It's certainly a trend that's at the beginning," he said, but one that nonetheless can make conservative Israelis feel threatened.
He said the criticism of Netanyahu's son was counterproductive in a country that increasingly finds itself isolated.
"For a country that has such a bad reputation supposedly, we don't help ourselves by making people like 'the other,' and by not being inclusive," he said. "We're insecure. People need to realize that having a few percent of our people intermarrying is not going to hurt this."
Netanyahu himself is a fervent Jewish nationalist and history buff, speaking out strongly against anti-Semitism and other threats facing the Jewish people. He has steadfastly demanded that the Palestinians recognize Israel as the Jewish homeland as part of any peace agreement.
In his younger days, Netanyahu was married to a non-Jewish woman who converted. Yair, a university student, is the son of Netanyahu's third wife, Sara.
Posted by Mike Ghouse at 8:19 AM No comments:

Holocaust and the Muslim Guy

Frequently, I am introduced in the following manner, "He is the first Muslim guy to commemorate Holocaust, and perhaps the first non-Jewish person to commemorate the Holocaust as well."  Of all the people on the earth, my mother would be pleased to know that I am doing what it takes to be a "good Muslim," to respect, honor and protect the sanctity of life.

As a Muslim committed to building cohesive societies, it was an honor to step up to the plate. Quran 3:133, "And vie with one another to attain to your Sustainer's forgiveness and to a paradise as vast as the heavens and the earth, which has been readied for the God-conscious." I am not driven by paradise, nor do I seek rewards. But it does mean building a cohesive world where no one has to live in apprehension or fear of the other. God-conscious simply means being caring and sensitive to all of God's creation; life and matter.

Of all the people on the earth, my mother would be pleased to know I am doing what it takes to be a "good Muslim," to respect, honor and protect the sanctity of life.

I have always believed, and I read the assessments of some of the best brains that if we can resolve the Jewish-Palestinian conflict, i.e., security to Jews and justice to the Palestinians, most of the world issues will collapse and a period of peace on earth will begin.

Commemorating Holocaust and Genocides for seven years is a fulfillment of a lifelong desire.

Thank you for the great "name suggestions" you have made for the new online news paper on the topic of Pluralism. We are down to two names now and we need your input. 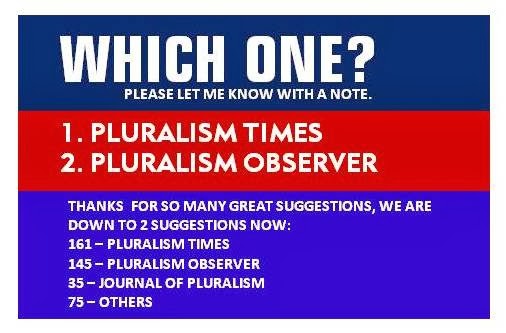 At least for a year, this will remain on-line paper with articles on Pluralism relating to society, culture, religion, politics, food and other issues where conflicts exist.

Funds permitting, we hope to make this a subscription based printed monthly magazine reaching out to decision makers.

WHAT IS PLURALISM?
"It is respecting the otherness of others"

You are who you are, and I am who I am. As long as we don't mess with each others space, sustenance and nurturence, and if we can mind our own business, we all will do well.  If we can learn to respect the otherness of other and accept the God-given uniqueness of each one of the seven billion of us, then conflicts fade and solutions emerge. Pluralism is not a set of rules, it is simply the attitude of live and let live religiously, politically, culturally and socially.  We are committed to building cohesive societies, where no human has to live in apprehension, discomfort or fear of a fellow being.